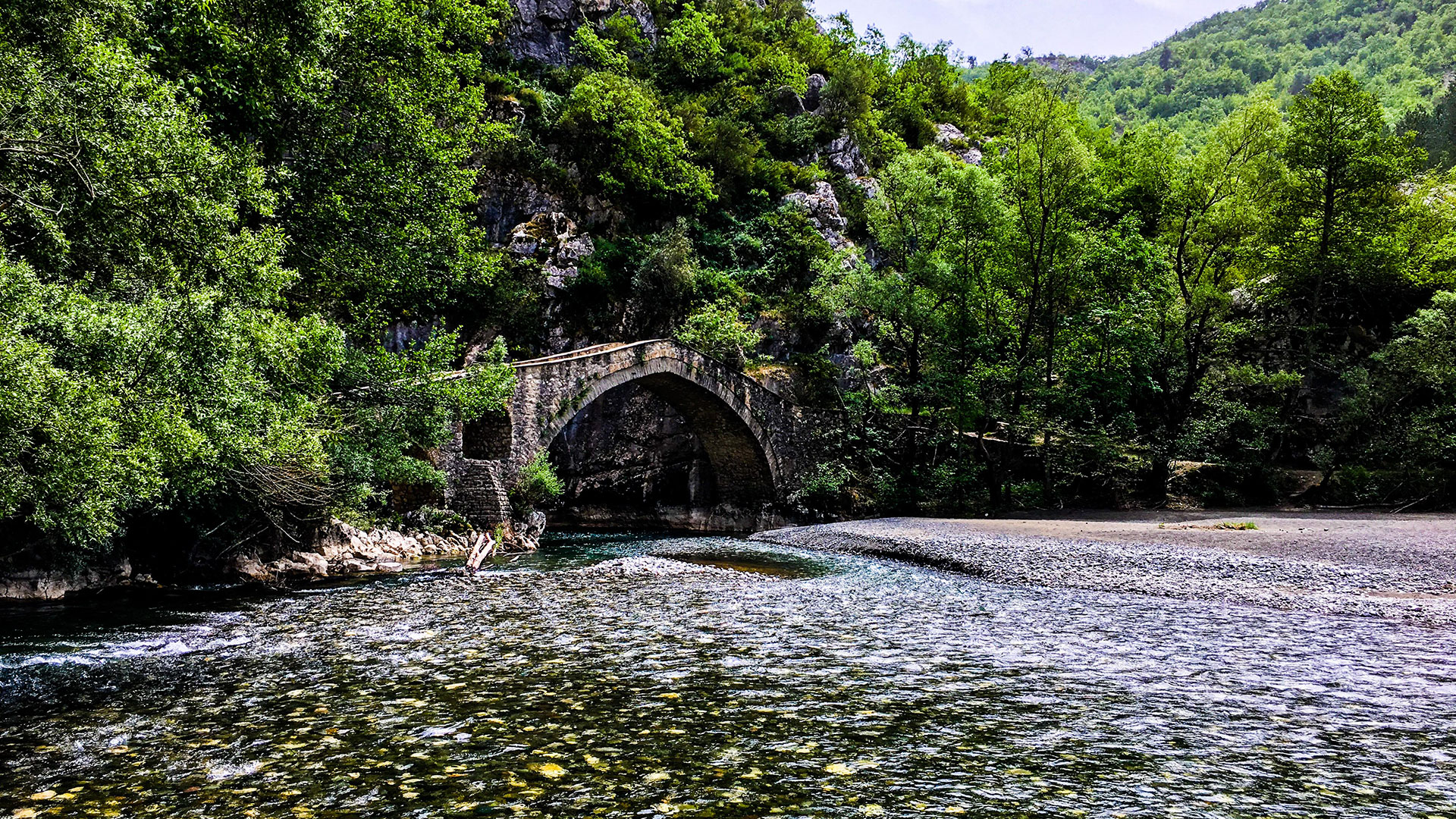 Tour through picturesque routes and forest roads of the mountain range of North Pindos in Western Macedonia and Epirus, with the high fir-covered mountains, the abundant waters, and gorges of unique beauty for a 9-day crossing of North-Western Greece.

Exploration trip to the protected area of Epirus with its important ecological and cultural characteristics. Familiarity with the unique architecture, the authentic traditional villages, the stone arched bridges, the history, the Greek folk tradition, the hospitable inhabitants and the special local gastronomy, following forest paths in the National Park of North Pindos and the National Drums -Aoo.

Day 1 | Athens – Ioannina
Leaving Athens, we drive on the highway for 400 km to the picturesque city of Ioannina with the homonymous lake. Stopping for coffee and admiring the Corinth Canal, a construction dream – a challenge that lasted 2,300 years until it came true, a stop for lunch by the sea and then cross the Peloponnese via the impressive cable-stayed bridge Rio – Antirrio on the western mainland Greece to drive north to the camp to spend the night in the best spot by the lake of Ioannina.
450 km of highway
Overnight Ioannina or Campsite

Day 2 | Pindos National Park and the villages of Zagori
Just before leaving the city, we can choose either a visit to the Cave of Perama, Ioannina, which dates back to about 1,500,000 years and consists of many consecutive rooms and corridors decorated with stalactites, stalagmites, curtains and impressive columns in magnificent clusters, or a walk on the picturesque island of Lake Ioannina. Off-Road routes in the dense forest, to discover the bridges, the rivers and some of the 46 villages of the area of Zagorochoria to walk the cobbled streets of the traditional settlements to discover the unique technique of the skilled stone masons. Gastronomic trip to the mainland cuisine. Lunch with traditional recipes prepared from the pure products of the area.
50 km main road
30 km dirt road
Overnight in Zagori or Wild-Camping next to the traditional bridge

Day 3 |Tour of the Vikos-Aoos National Park
Tour of West Zagori with its impressive stone bridges. A day dedicated to the narrowest gorge (Guinness Record) in the world, VIKO, under the “stone forest”, with the impressive rock formations created by the overlapping horizontal layers of stone. On-Off routes on the southwestern slopes of Mount Tymfi and the highlands of the Beloi Plateau, as well as a 20’ walk to the Beloi Viewpoint, on a stunning natural balcony 900 meters high overlooking the Vikos Gorge. Tour of the unique villages in Central & West Zagori, in the ravine of Mezaria with the famous Skala tou Vradetou that connected the village with Kapesovo and the rest of the world until the 70’s.
50 km main road
30 km dirt road
Overnight Konitsa / Papigo or Wild-Camping under the plane trees on the bank of Voidomatis, the cleanest river in Europe.

Day 4 | The villages and the rivers in the shadow of the Towers of Astraka
Before leaving the area of Zagorochoria, an impressive off-road route in the unique Aoos Gorge, for diving under the waterfall and to visit the Byzantine monastery (1442) between the steep slopes of Tymfi. A route along the Sarandaporo river will lead us to the area of Mastorochoria, famous for the skilled stone craftsmen whose works stand for generations throughout the Balkans, with the younger ones, in the early 20th century, building with stone the galleries of the New York subway.
60 km main road
30 km dirt road
Overnight Vourbiani or Wild-Camping in the dense forest with the picturesque Chapel.

Day 5 | North in the mountains of Grammos
Tour of Grammos, the wild mountain with its endless meadows and steep slopes. We cross the forests of Grammos with the traditional villages of Mastorochoria. Routes in the dense forest, climb to the top at 2520m on the border of Greece, camping in the Arrenes lakes hidden in the forest, a complex of two small alpine lakes in the shadow of Grammos, which are one of the most beautiful mountain aquatic ecosystems in Greece. Lake Moutsalia, or as it is most often referred to, Lake Arenas, is located in a lush beech forest at the root of the top of Grammos, Epano Arena (altitude 2,196 m).
10 km main road
50 km dirt road
Overnight Aetomilitsa or Wild-Camping Lake

Day 6 | The mountainous area of Grevena
From the forests of Grammos we drive to the Pindos National Park in the area of Grevena and the river Venetiko where it will be our base for the next two days.
The magnificent rocks that are just behind the arched bridge (1743), with the almost 14 meters large arch and the 5 meters small, impress every visitor while its height is close to 8 meters, are the entrance to the gorge of Portitsa and they look like cliffs that lead in heaven. Under the bridge and between them passes the Venetian, the tributary of Aliakmonas that is famous for its stone bridges. Walk to about 500 meters of the gorge and be enchanted by the beauty created by nature.
60 km main road
30 km dirt road
Wild-Camping on the river, under the traditional Stone Bridge

Day 7 | At the core of the Valia Calda National Park
Routes in the Valia Calda National Park (Valia Calda Warm Valley), in one of the most pristine areas of Greece in the shadow of the only ones in Europe, tall, straight, Black Fir and the roots of arrogant Robolos, next to swollen streams full of swollen streams water. The fresh footprints of the bear next to Arkoudorema (MET the river, who come to drink water), the signs of the wild boar, the rhythmic beating of the black woodpecker and the happy walking of the ash crow mark one of the last immaculate lives of the immaculate Greeks.
In the lowlands, from 1,000 to 1,600 meters, there are large forests of tall black pines (abies cephalonica) and forests of Macedonian Pine, which are then joined by dense beech forests. Between them rise a few clusters of rare forest Pine (Pinus sylvestris) that are remnants of the ice age, while the strong presence of the boxwood (Buxus sempervirens) is characteristic. After 1,600 meters and up to the peaks, the centuries-old Robola (Pinus heldreichii), unique natural monuments, reign.
20 km main road
40 km dirt road
Wild-Camping on the river, under the traditional Stone Bridge

Day 8 | On the “beastly” rocks of the humble ascetics
A picturesque mixed route that will lead us to the overnight place under the imposing rocks of Meteora, since before we drive high, to the almost spooky stone rocks of Meteora, (Preserved and Protected Monument of Humanity by UNESCO and the largest monastic state in the country after Mount Athos) to visit one of the 24 monasteries of Meteora, the monastery on the edge of the cliff, the Monastery of Agios Stefanos of the 12th century.
70 km main road
15 km dirt road
Overnight in Kalambaka or Campsite

Day 9 | Return
After breakfast our return journey begins with intermediate stops for coffee and a farewell meal by the sea.
450 km of highway

* Our AGB Terms & Conditions apply to all the bookings.
** If the minimum number of participants is not achieved on time, Rolling Turtles is entitled to withdraw or postpone the tour. In this case, the participant will be reimbursed for the full paid amount or receive a voucher for the next tour available (participants own decision).